Gourmets get a new taste of the Townships!

Sherbrooke, Wednesday, June 15, 2022 – The Eastern Townships is known as a destination for ‘gourmet tourism’ and indeed, it’s a rare visitor who isn’t tempted by the region’s (rightly acclaimed) food offerings. A taste of the Townships - in both senses of the word! - can be enjoyed at its signature restaurants, its 30 vineyards (and equal number of microbreweries), along the Cheesemakers Circuit (Les Têtes Fromagères), in cozy village cafés (Cafés de village) and the farmers markets, that are scattered throughout the area. This summer, as in previous years, the region’s food producers, artisans and chefs, are also offering visitors many new gourmet delights….

The Fromagerie La Station, a cheesemaker in Compton, is finally opening its Économusée® to the general public. Visitors to the museum learn about the various processes involved in manufacturing cheese, through interpretation panels and a room designed to look like a traditional maturing cellar. The economuseum also has a boutique where you can stock up on supplies or order a grilled cheese sandwich or a picnic basket filled with different cheeses.

After years of operating Le Cafetier de Sutton, the owners have passed the torch to Marconi, a chain of popular Montreal restaurants. Now rebranded as Mollies, the Sutton establishment is a combination café, snack bar and dinette with a redesigned menu featuring local products, wines and beverages, as well as a wide choice of coffees, roasted on site.

The Les Têtes Fromagères circuit now includes 16 cheese manufacturers. The tour showcases the incredible diversity of artisan cheesemakers in the Townships and the quality of their products: fine cheeses, curds and raw milk, sheep's and goat's cheeses. This circuit includes the Fromagerie Nouvelle-France in Racine, the Fromagerie Des Cantons in Farnham and a number of others.

A New branch of the Artisanal Bakery Dora

A veritable institution in the village of Eastman, Boulangerie Artisanale Dora is opening a another branch this summer, this time in Orford, where it will offer breakfast and lunch in its brand-new Espace Café. The popular bakery will continue to serve its long-time customers with baked goods, doughnuts, pastries, ready-to-go meals and local deli products. The original branch will also have an ‘Espace Café’ by the end of the summer.

Beyond wine – gourmet experiences at the wineries!

This summer, a number of gourmet experiences (in addition to the usual wine tastings), will be offered at the vineyards along the Brome-Missisquoi Wine Route. Château Ste-Agnès, for example, a historic, European-style winery, will have an on-site chef who will prepare a four-course, country-style meal or a ‘luxury’ picnic. Vignoble Gagliano, taking its inspiration from Italy, will offer wood-fired pizzas and wine, while Vignoble de la Bauge is planning wine-themed gastronomic events with cheesemakers, chefs, market gardeners and fishmongers, who will offer some insight into their respective professions.

Throughout the summer season, visitors will have the choice of visiting no fewer than 40 public and farmers markets – some well-established, others brand-new. Some markets are expanding beyond merely selling produce. Stoke Public Market, for instance, has added a bistro under a Big Top as well as a stage for live events. The Compton Evening Market (back for a seventh year) has also made some changes. It is adding new stalls and making the site more accessible to people with reduced mobility and families with strollers. Last, but not least, is the P'tit pub, the heart of the Marché de la petite école de Lingwick. Back after a two-year break, it specializes in oven-fired pizza – delicious enough to satisfy the most discerning foodie! A geolocated map, a full list of Eastern Townships markets and their opening times, are available online.

Stock up for a picnic or a festive BBQ

The Réseau des Haltes gourmandes in the Haute-Yamaska region of Granby, is a network of around 50 agritourism entities (including food producers and artisans) who offer gourmet tours during which visitors can buy (and sample) the freshest of seasonal products. All along the way, you’ll meet people who are passionate about their métier and it’s the ideal opportunity to enjoy the relaxing ambience of the countryside – source of the very ingredients that are part of the food-oriented tours. Themed around what happens to be in season at any particular time (in June you’ll find asparagus, mushrooms, haskap berries…..), the tours offer a number of different itineraries, so don’t forget to pack a cooler to plan a picnic or a festive BBQ!

A rally and maple products

The Ferme des Petits Torrieux near Lac Megantic, is once more welcoming visitors with a unusual way of exploring the farm, namely by taking part in a rally. Young and old will have fun discovering the animals in this unique manner and at the end, they can enjoy a snack in the recently added picnic area or the brand-new maple grove. These additions now mean that various maple products (maple taffy, maple butter, maple syrup, maple vinaigrette etc.) are going be available at the farm all year round. Other activities include pick-your-own, yoga, a winter safari and more….

Agritourism is featured on the Val-Saint-François circuits

The Val-Saint-François region is offering eight, one-day circuits this summer, some focusing on agritourism. Saddle up and follow the Agro-Vélo circuit to visit places such as Gouin Park, Le Campagnard (a cheesemaker), the Café du Couvent and the Lussiers Belgians Farm. On the Rando-Gourmande circuit, you can spend the day by car and on foot around the area between Stoke and Windsor. Get ideas from the website and follow one of the routes by listening to the podcast. tourisme.val-saint-francois.com/circuits-touristiques/.

Numerous attractions along the Véloroute Gourmande

The Véloroute Gourmande is a new, 250-km cycle route between Montreal and Sherbrooke, (part of the Route Verte and Trans Canada trails). The two cities offer attractions galore and along the way, cyclists (and foodies!) can enjoy more than 120 agritourism entities, restaurants, cafès, microbreweries and vineyards, much of them set amid the stunning landscapes of the Eastern Townships.

Bistro Kóz, THE new place to dine in Magog!

Bistro Kóz, part of the brand-new Versō Hotel which opened last winter, is situated on the shores of magnificent Lake Memphremagog. With two outdoor terraces (one on the upper floor) diners can enjoy the spectacular view, while tucking into Mediterranean-themed dishes, inspired by the cuisines of Greece and Turkey. The ambience is warm and friendly and the bistro has become THE place to dine in Magog! Also part of the complex is Le Kómptoir, a snack bar that offers light meals and beverages to go, right next to the bike trail.

Gourmet events are back again!

Tourisme Cantons-de-l’Est (Tourism Eastern Townships) is one of 22 tourism associations (ATRs) in Quebec and the official representative of Quebec's Ministry of Tourism in the Eastern Townships. Since 1978, the TCE’s mission has been to promote tourism development, marketing the region within Quebec and internationally. TCE brings together more than 500 members throughout the 9 regional county municipalities (MRCs) and in all sectors of the tourism industry : accommodation, restaurants, attractions, activities and events. 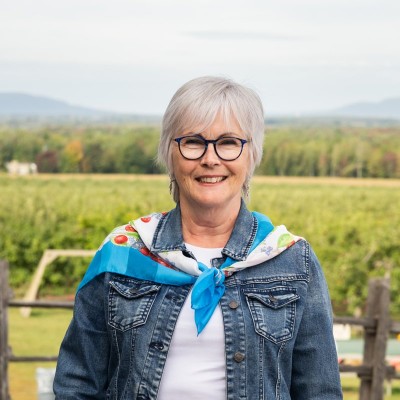