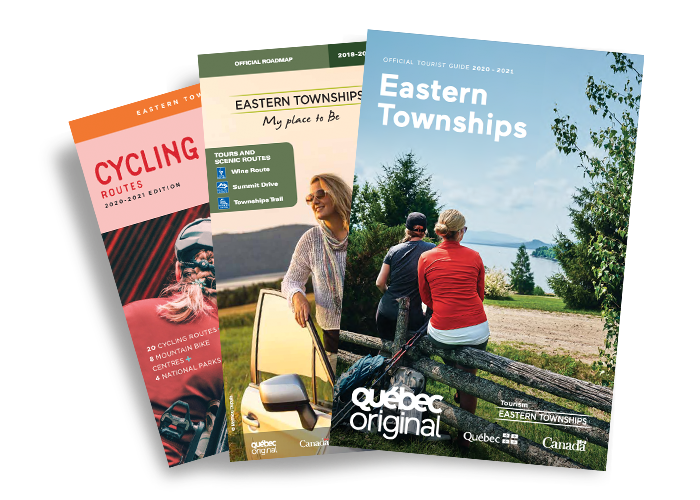 Cycling : The Perfect Circuit to Gently Get Your Season Started

Note: Because of the situation, please note that the different establishments may have had to close temporarily, or modify their operating hours. We suggest you contact them before leaving home.

My friend Isabelle Richer, a Radio-Canada journalist and host, also an eminent cyclist, once said to me, “Yvan, I wish you many kilometres of velvety smooth routes!” Her words came back to mind as I was pedalling on some freshly paved roads during a recent outing on the Heritage Circuit, which starts out in Bedford, near the American border.

More so, I was cycling in Pierre Foglia’s neck of the woods, a true cult figure I hold in high regard! We found ourselves going there, my sweetheart and myself, because we were looking for an early season ride that would cover a decent distance with few elevations. We made the right choice, as we were lulled by these 41 km of sinuous and quiet roads, enhanced with only a few small hilly areas. I had already cycled here in the past, but I’d forgotten how all the ancestral homes, the farms, the bucolic roads and panoramas commanded such a peaceful atmosphere!

Before getting on our bikes, we took our time as we headed out of the town of Bedford. This little “country town” was founded in 1780 as loyalists from the United Stated fled the revolution and settled here. Bedford, ineluctably linked to its agricultural fair, would have celebrated its 197th edition this summer, had it not been for the darn coronavirus situation… A quick look around the downtown area, the Pike River, many heritage homes and we’re off!

Almost immediately we found ourselves riding along a string of farmlands and wooded segments, before we reached a short gravel/dirt covered section. We warmed up our leg muscles as we pedalled the first 14 km, and then entered the St-Armand area, where Foglia wouldn’t want to see too many tourists arrive to “not endanger the landscape,” as he once wrote. 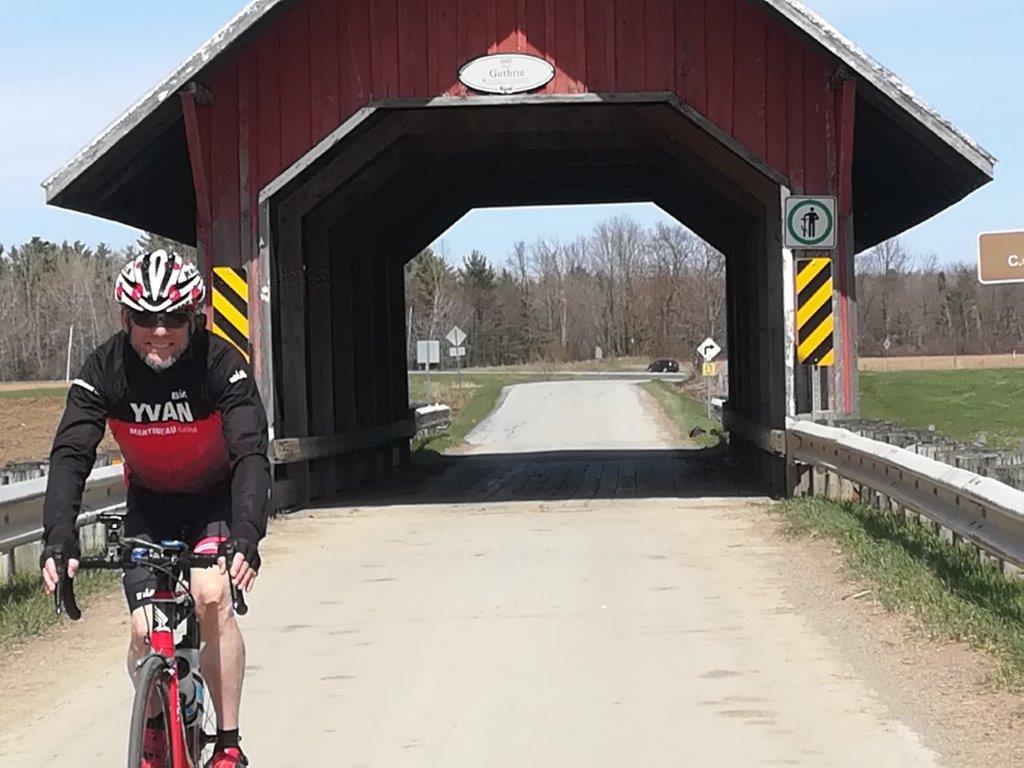 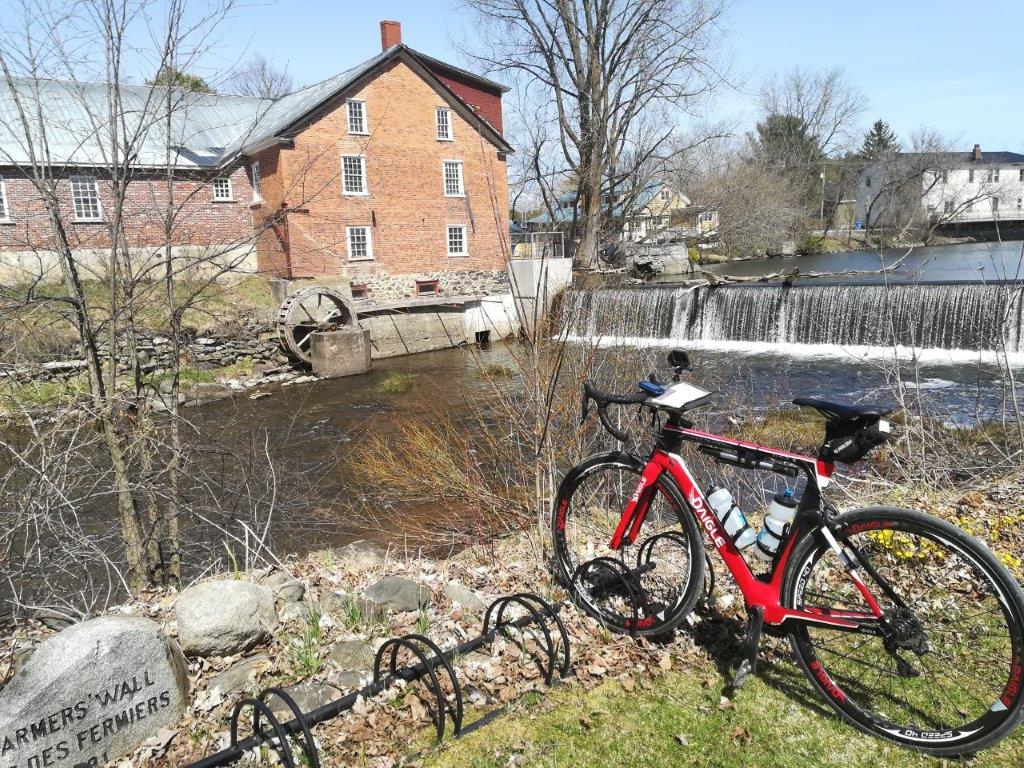 Riding along these fields and groves, bordered by dairy, cereal, vegetable and breeding farms (720 inventoried in Brome-Missisquoi), on routes offering just a few smooth hills, we were constantly awestruck by all this artwork of nature unfolding around us. Then, a sweet surprise appeared before us on Chemin Edoin: a covered bridge to cross over … a small creek! I later learned that this is the smallest and the oldest of this style in Quebec. A bit further down the road we got a glimpse of the Route des vins de Brome-Missisquoi as we entered the Stanbridge East sector. We took advantage of this moment to pause by the Missisquoi Museum along the Rivière aux Brochets (the Pike River), in front of the antique shop Au fil du temps, where we found a wooden horse pulling a carriage. Cool!

A few kilometres further and we were now on our way to Mystic and the Walbridge barn, known for its 12 sides and turning bridge inside. We were somewhat sad that we had come to the end of the route as we arrived back in Bedford. You all know how much I enjoy food; therefore, I can’t leave you without recommending a stop at the Café Rouge, on Main Street, for the pastries and cakes and for the coffee they roast right here. Or, perhaps Capeline et chocolat, a chocolate factory and sweets shop. You’ll treat yourself to a grand and blissful end to your day!

NB: The two short gravel/dirt, 3.2 km sections weren’t a problem for me. They shouldn’t stop you from taking this route with your road bike. 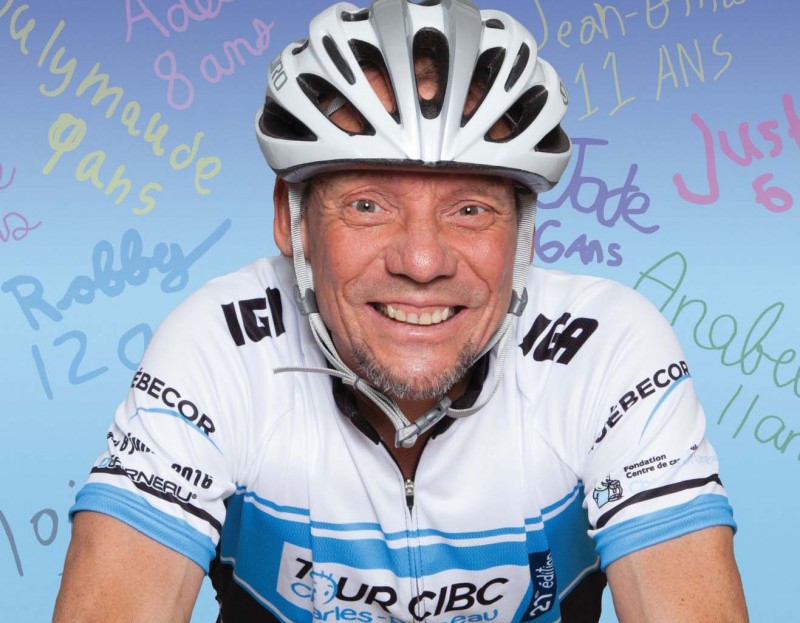 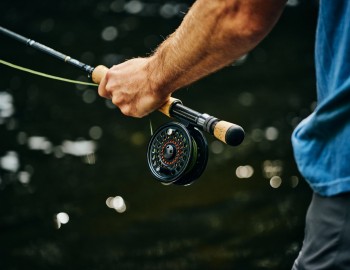 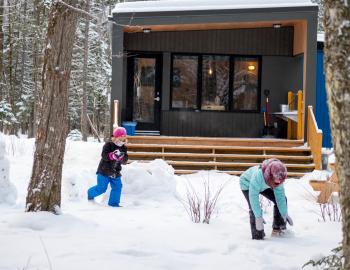 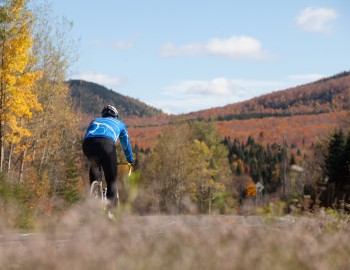