Discovering the Covered Bridges of the Eastern Townships

While there were once more than 1,000 covered bridges built throughout Québec, there are now less than a hundred in the entire province, 15 of which can be found in the Eastern Townships. These fascinating structures bear witness to our past, and constitute important elements of the region’s built heritage. Let’s take a look at our 15 covered bridges that continue to stand the test of time. 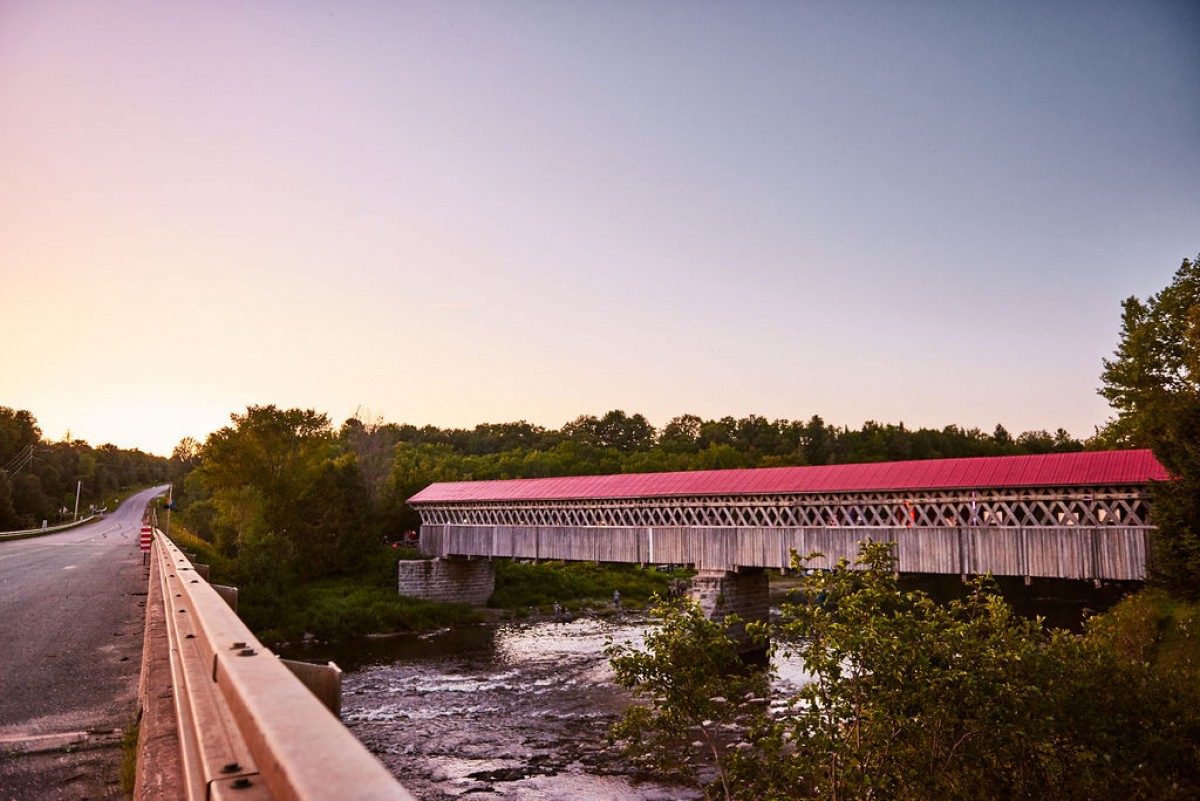 Measuring almost 63 m, it’s the longest covered bridge of the Eastern Townships. Before the pandemic it served as the venue for the La nuit du pont couvert festival held every year during the month of August. 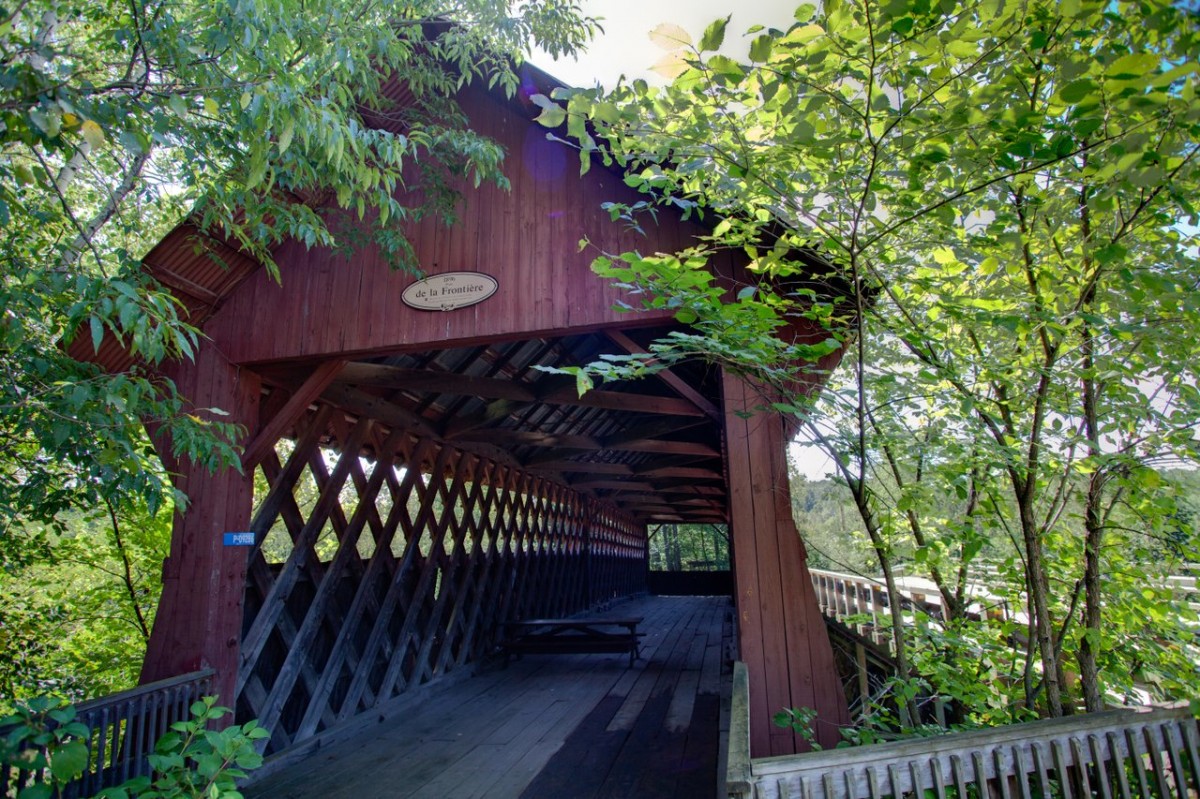 Also called Province Hill, this bridge is located nearby the Canada-US border and was designated a heritage building in 2008. 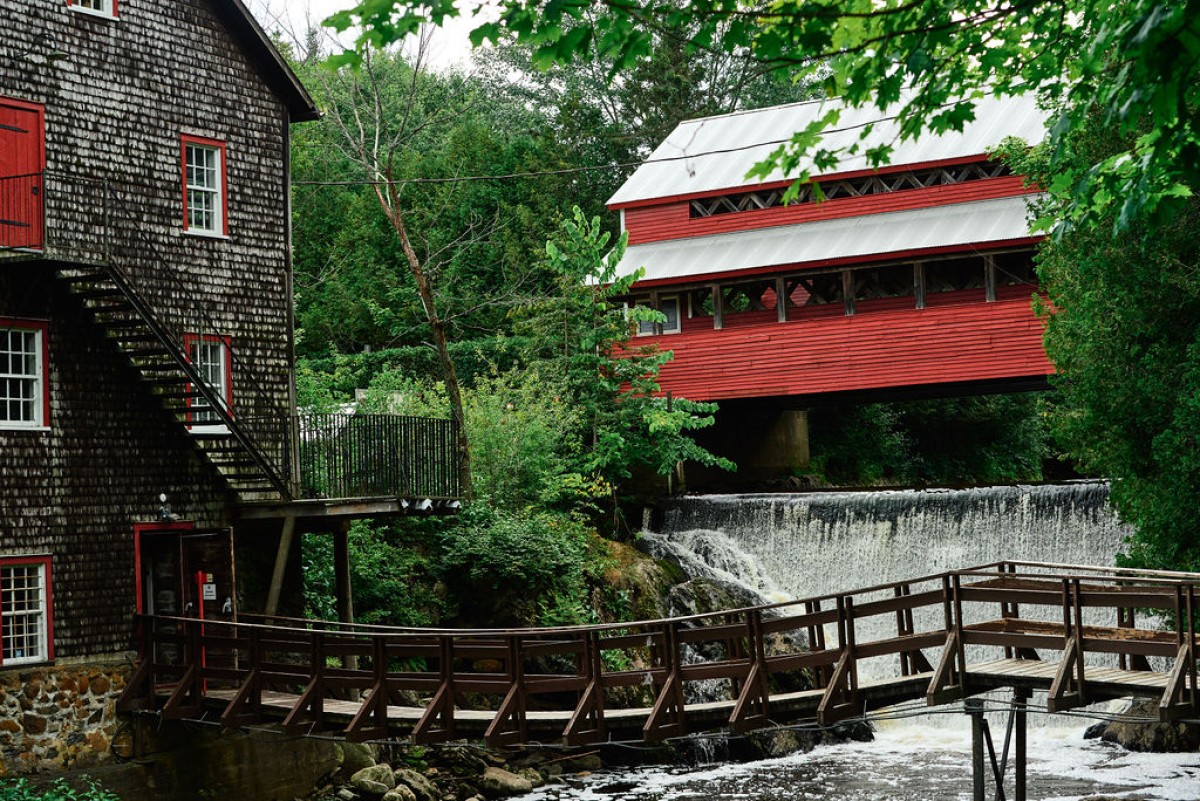 An integral part of the Ulverton Wool Mill landscape, this bridge is one of the most recently constructed in the area. In fact, it was named after the man who contributed to its restoration and reconstruction. Interestingly, and rather rarely in Québec, a covered footbridge runs alongside the bridge.

Location: 210 Porter Road, Ulverton
Year built: 1994. this is a replica of the original bridge built in 1885.
Still in operation: Yes 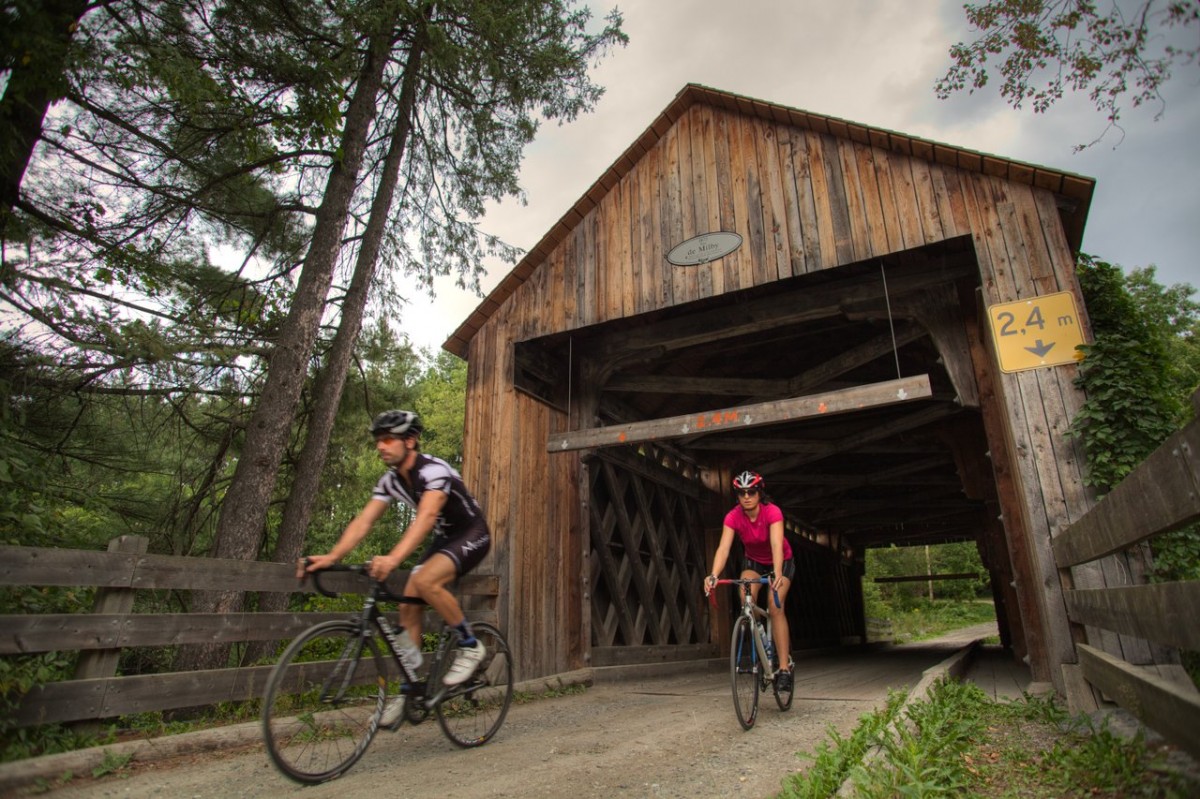 Designated as a heritage building in 1992, the Milby covered bridge has some unusual features for a bridge of this type, including a roof made of cedar shingles instead of metal. It also serves as the entrance to the Camping du Pont Couvert. 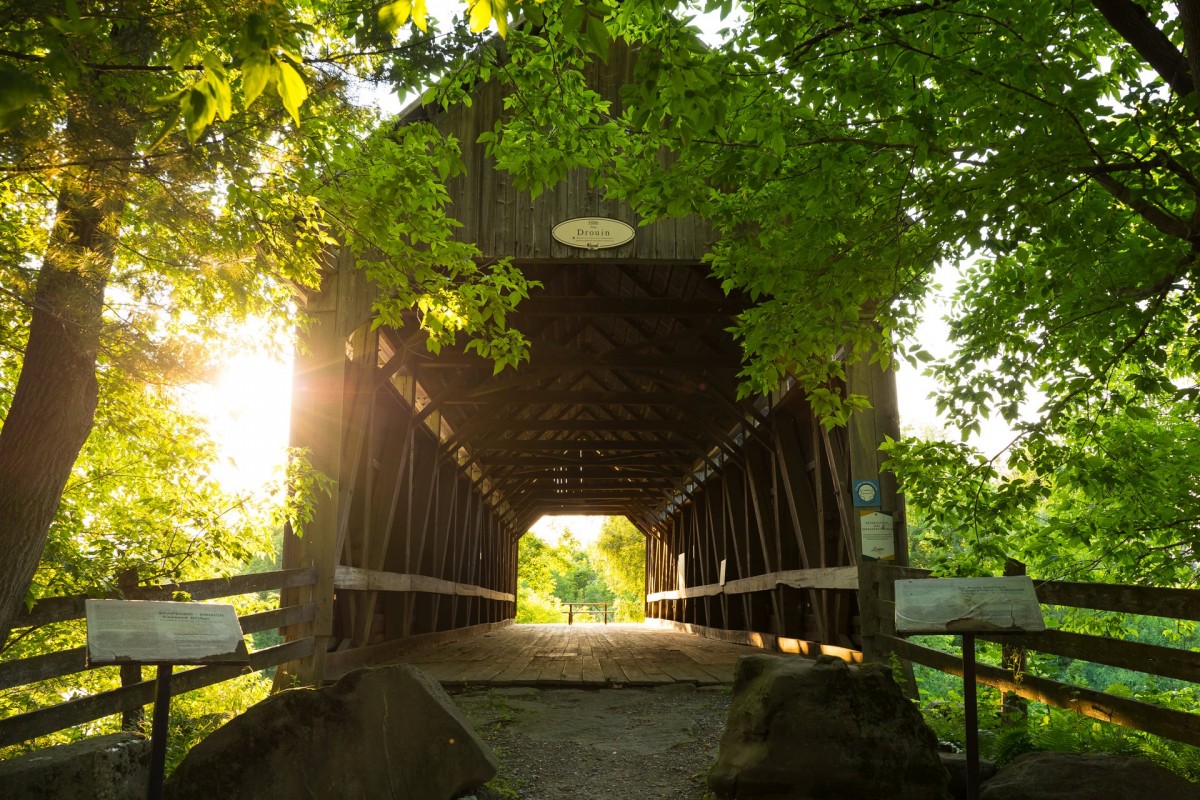 A landing near the bridge for small boats (kayak, canoe, paddleboard) will allow you to admire the bridge from the Coaticook River.

Location: Chemin Drouin, Compton
Year of construction: 1886
Still in use: no 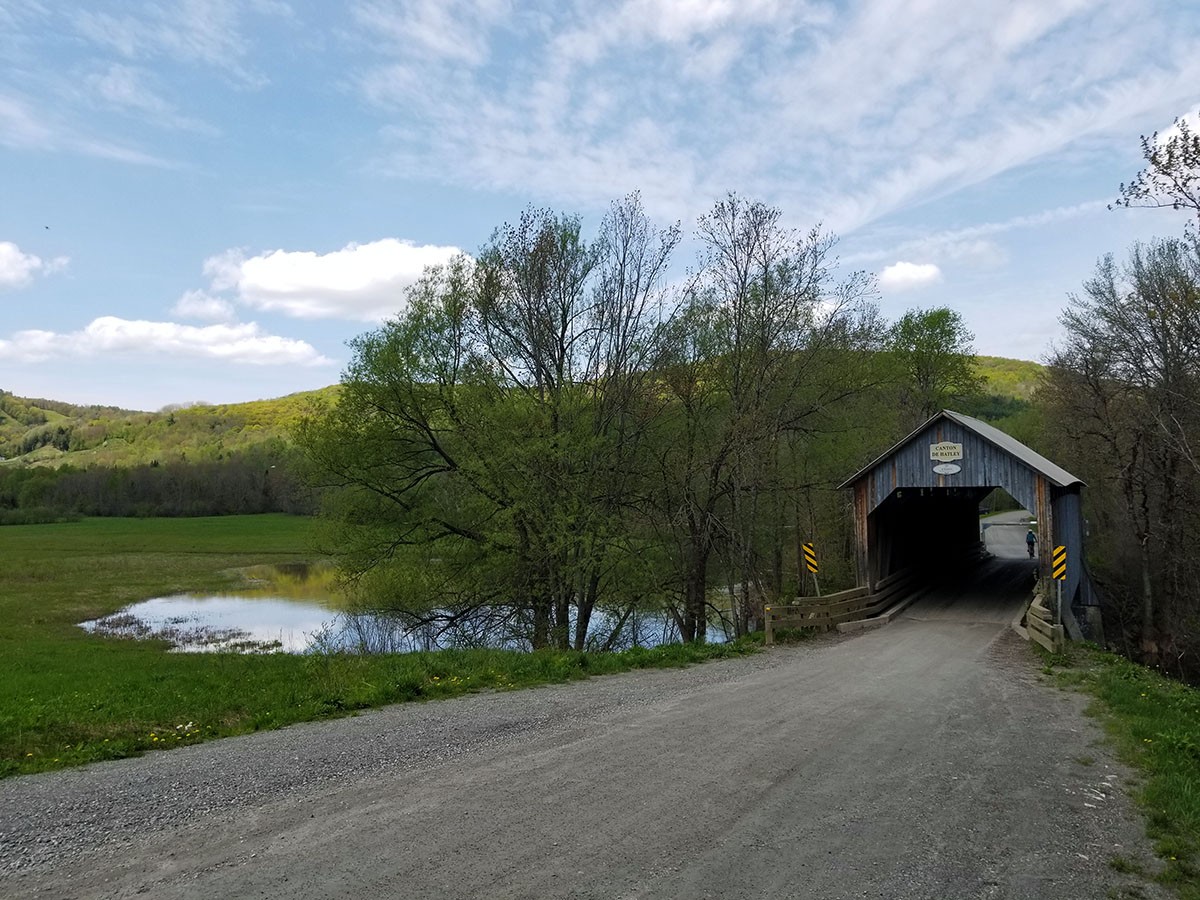 It’s been restored several times, and was even completely closed for a few years, but today it welcomes travellers once again and is one of the remnants of the former mining town of Eustis.

Location: Chemin Astbury, Waterville
Year of construction: 1908
Still in use: Yes, but only in the summer 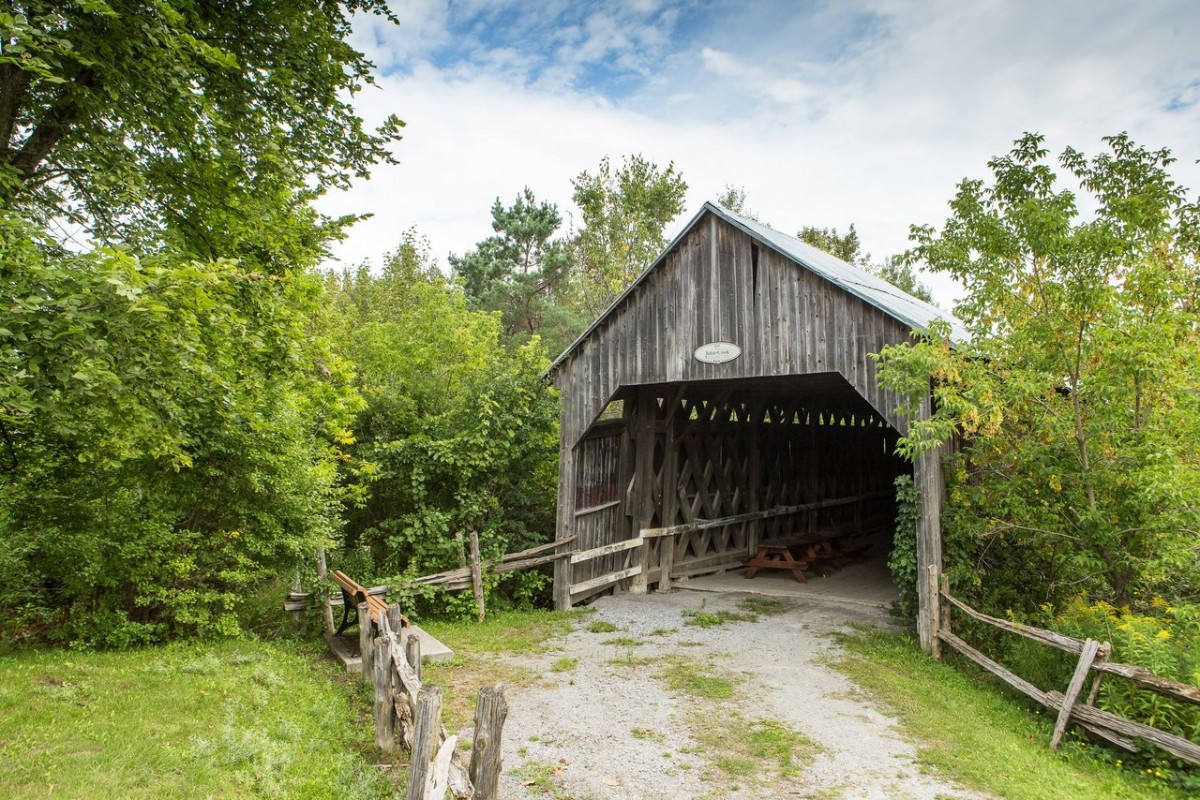 It’s the oldest covered bridge in the Eastern Townships. It was named after John Cook, one of the first settlers of Cookshire-Eaton. 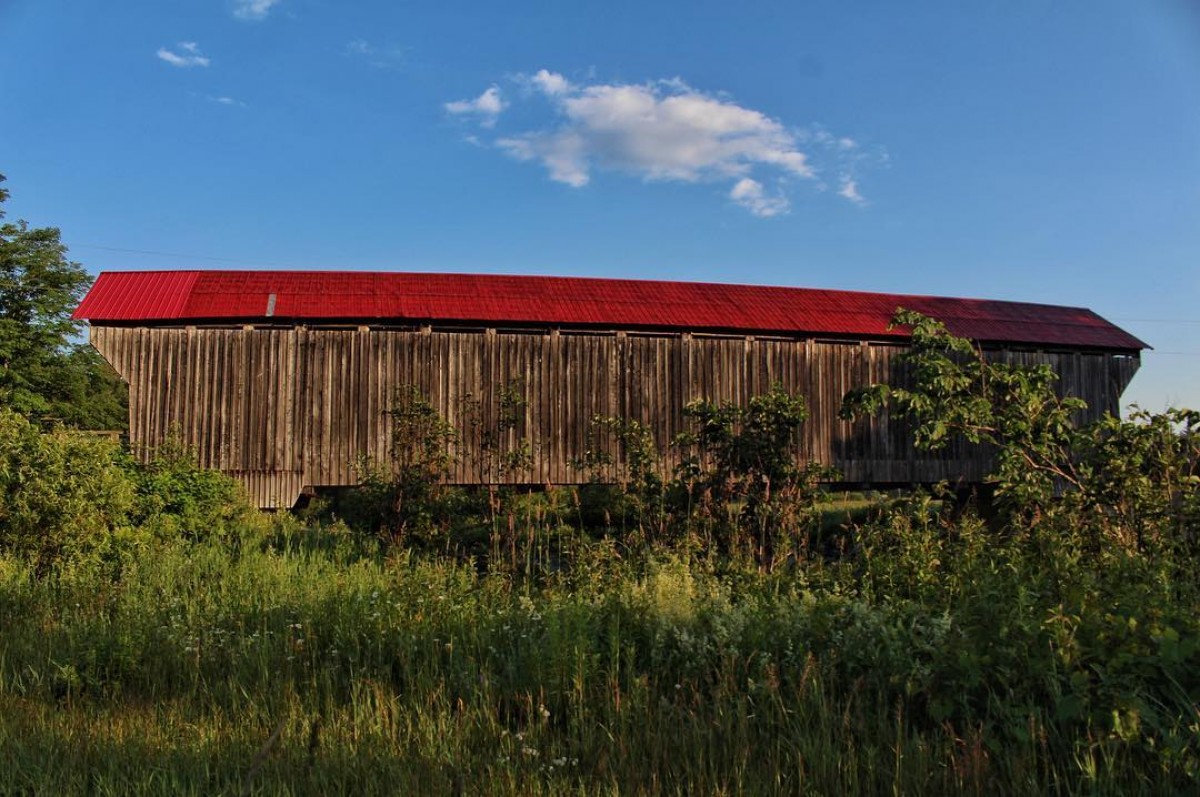 The roots of a tree were used to carve out some of the structural elements of this bridge. A feature you will also find on the Eustis Bridge. 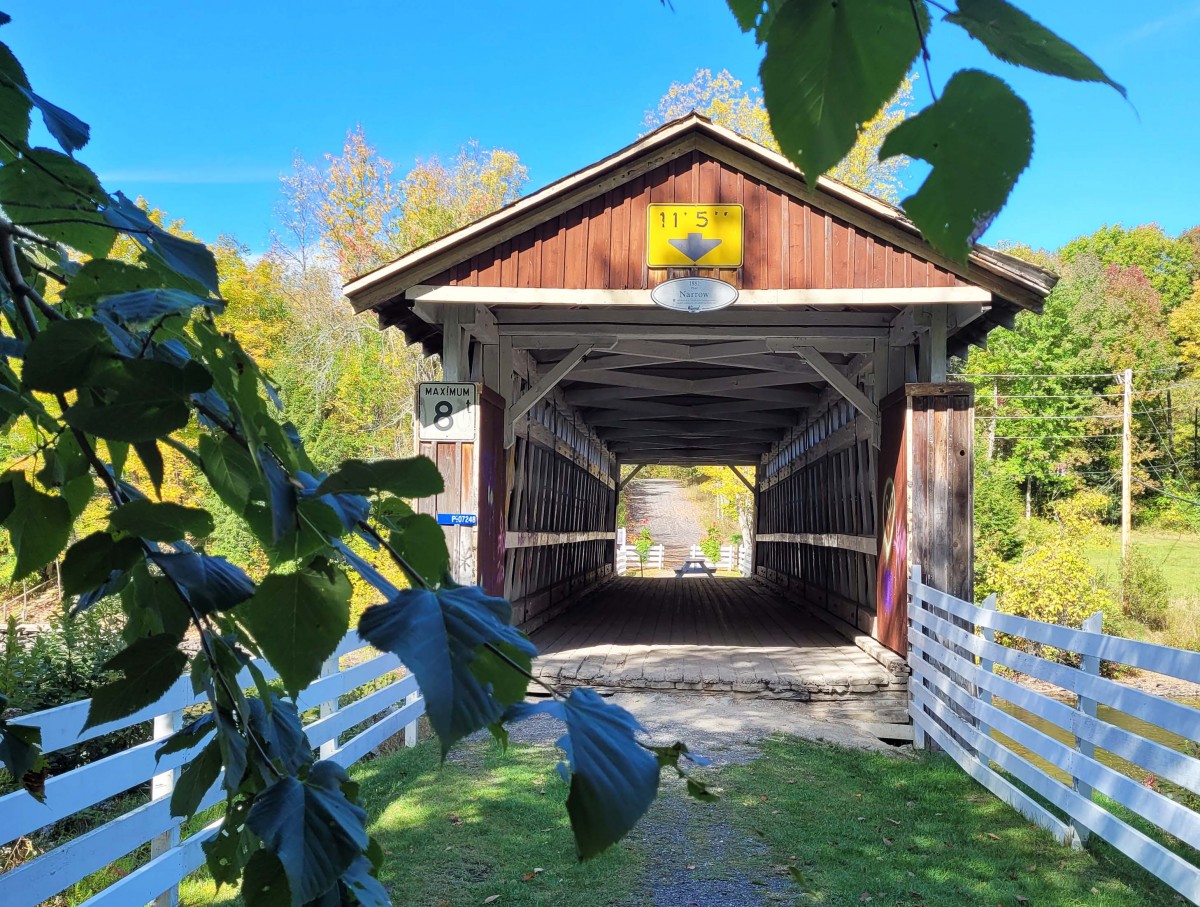 The name of this bridge comes from the fact that it spans the narrowest part of Fitch Bay on Lake Memphremagog. It’s one of the few covered bridges built over a lake rather than a river.

Location: Narrows Road, Stanstead
Year built: 1881
Still in use: No 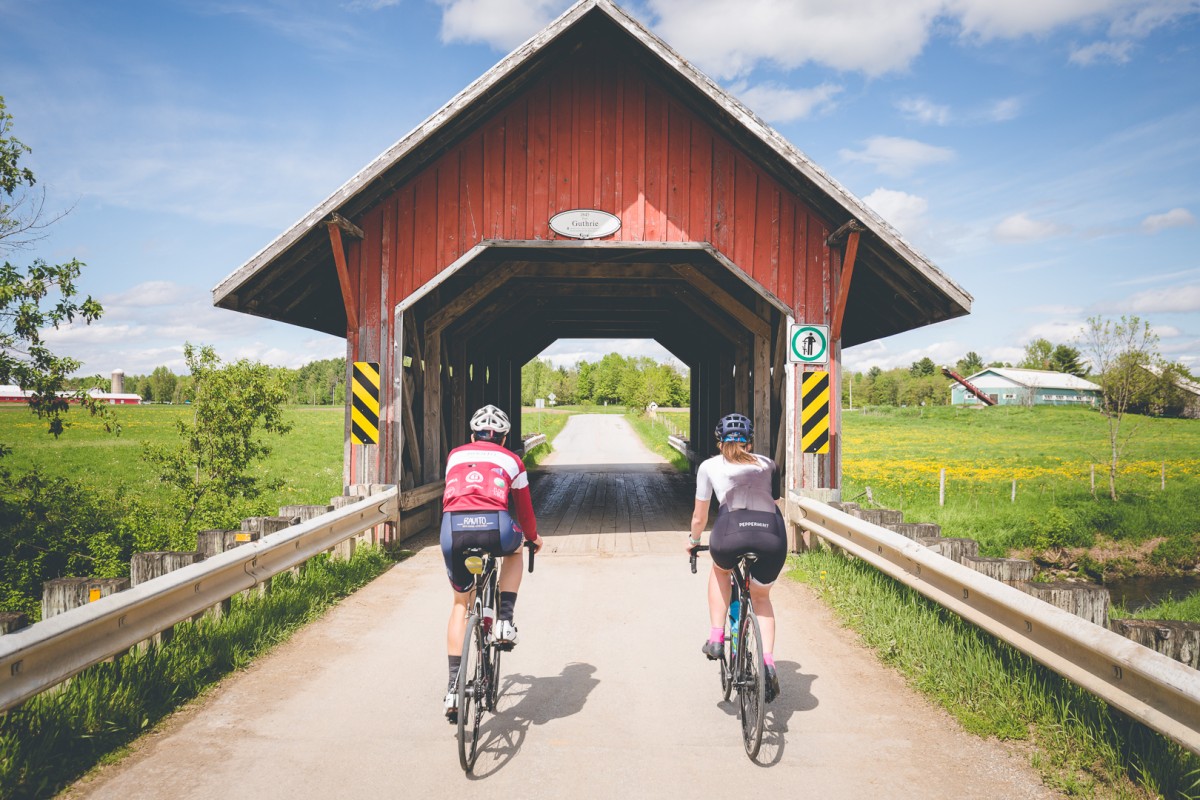 The last remaining bridge in a series of four similar bridges built in the Saint-Armand area, this covered bridge is also the shortest in Québec measuring 12 m in length.

Location: Chemin Edoin, Saint-Armand
Year of construction: Although the date of construction of this bridge is posted as 1845, the current bridge dates back to 1888.
Still in use: Yes 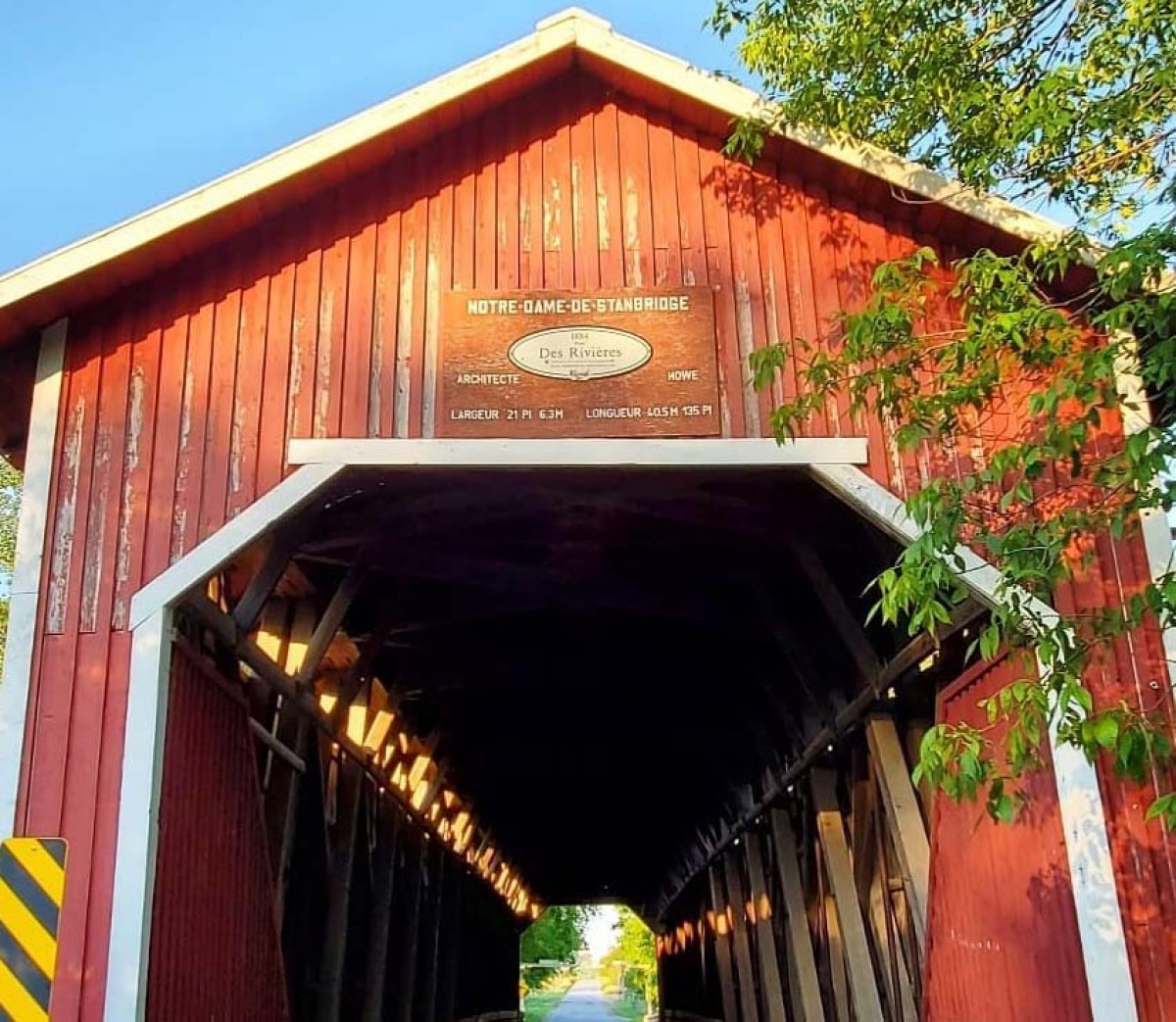 It’s the last remaining Howe truss bridge (a construction method involving the addition of adjustable steel tension rods in the structure) in Québec. Few bridges were built using this technology because of its complexity. 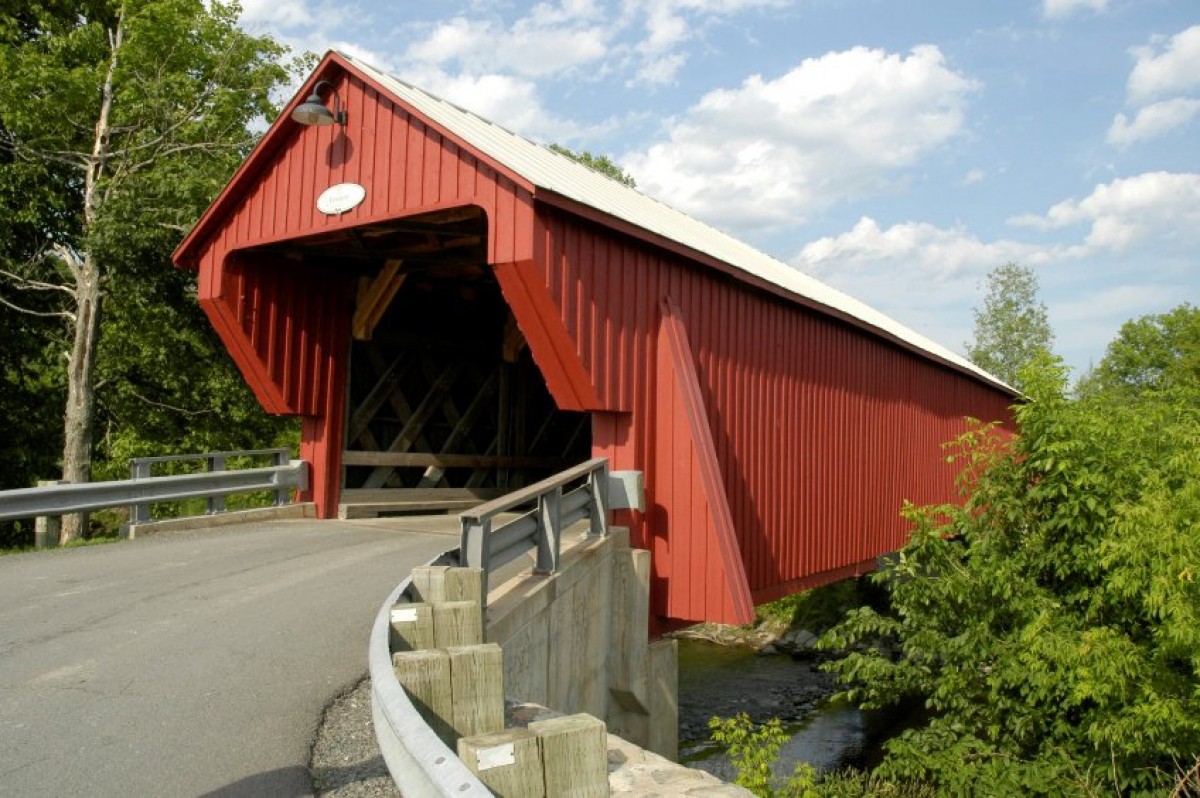 The architecture of the entrance portal is one of the distinguishing features of this covered bridge spanning the South Yamaska River. Over the years, it has undergone numerous repairs, notably following truck accidents and fires. 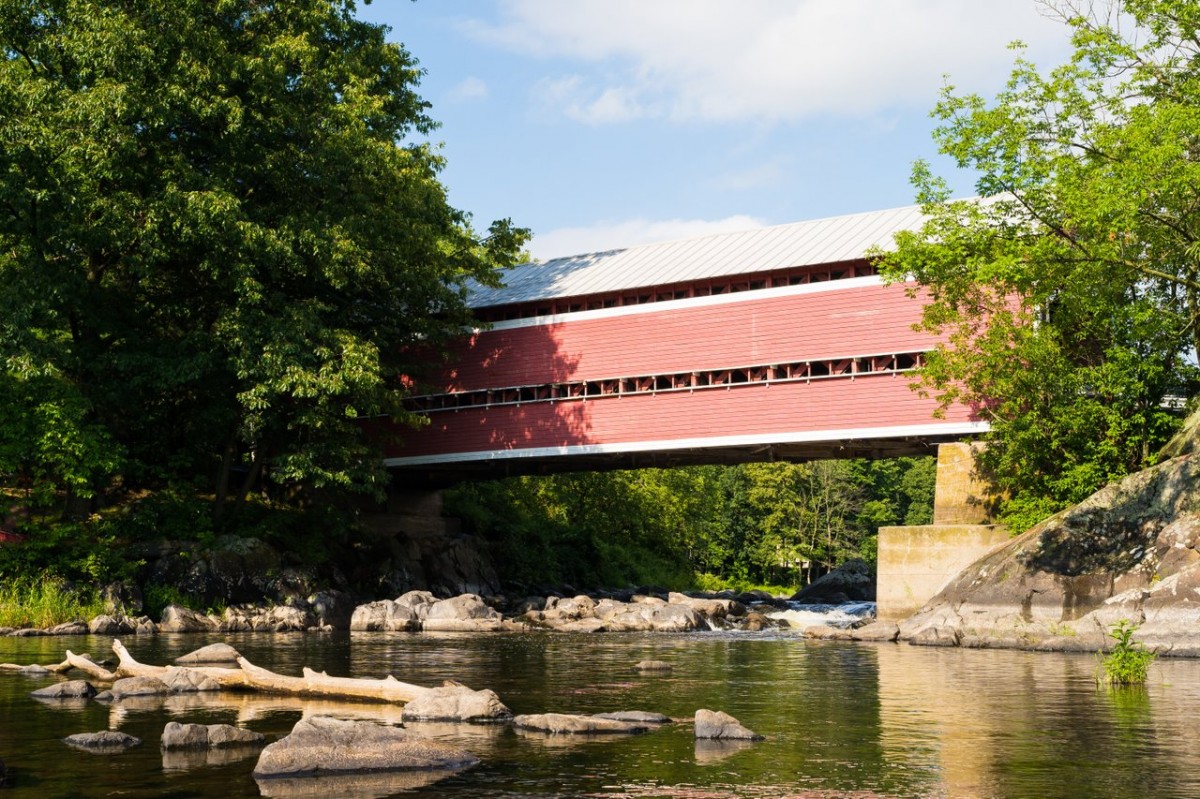 An amusing fact: in the 1980s, this bridge was showcased in a Sico paint advertisement and in the process, it received a major makeover! 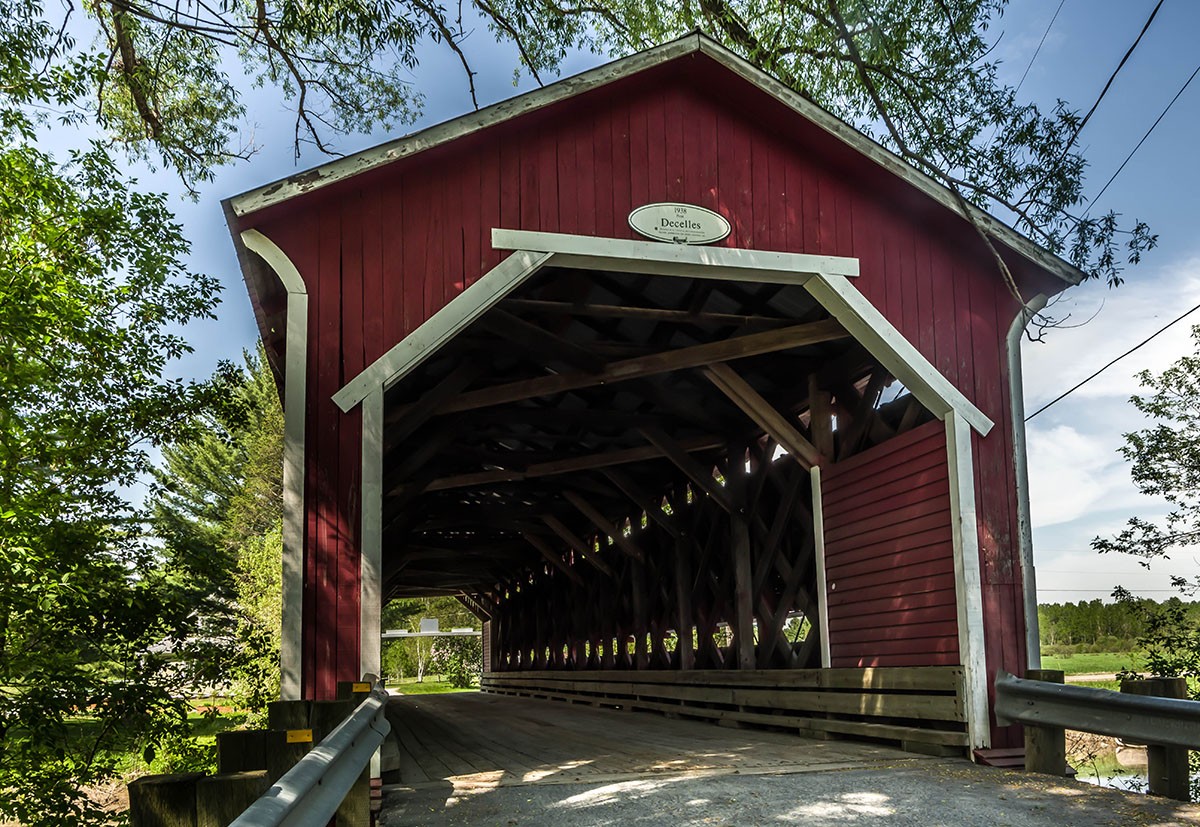 Regularly threatened by spring flooding, this second covered bridge in Brigham was raised in 2007 to preserve its use. Like the Balthazar Bridge, it spans the Yamaska River. 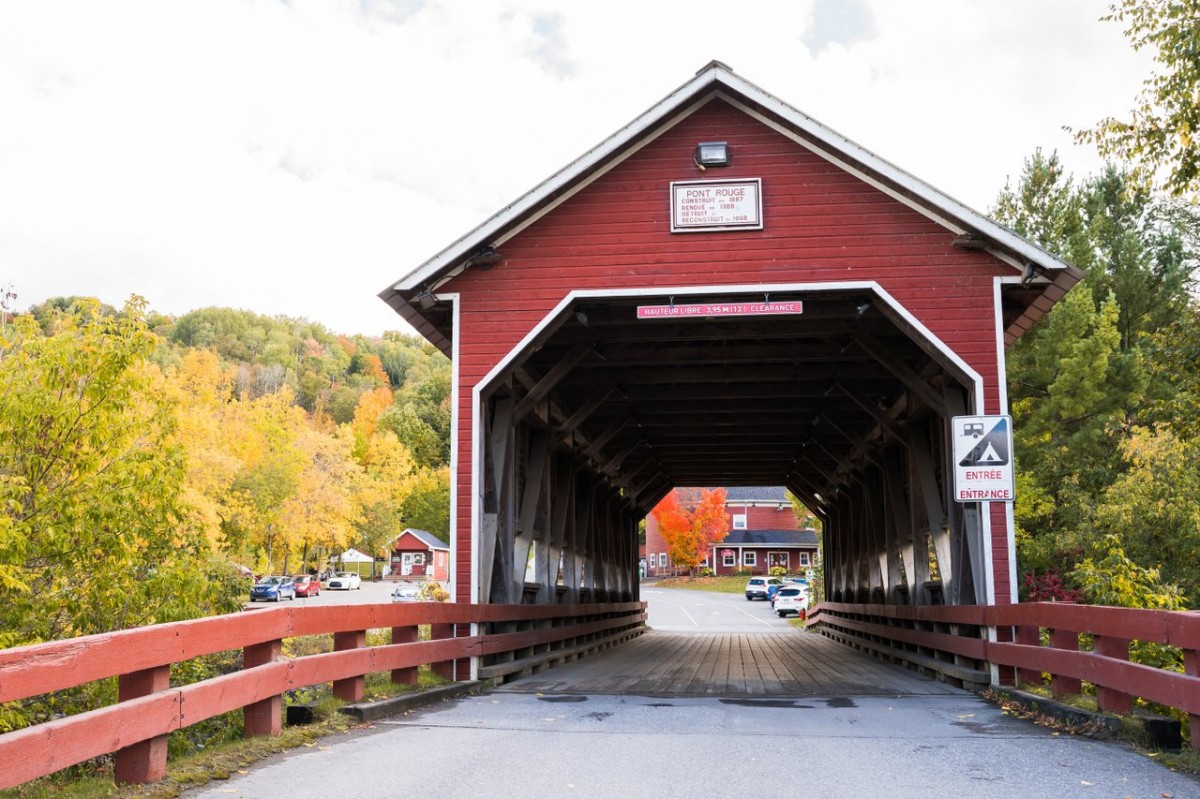 Although it’s not considered as an authentic covered bridge, Coaticook’s Pont Rouge is still worth a look! Since it’s located at the entrance to the Parc de la Gorge de Coaticook, take this opportunity to explore the park, which also has the longest pedestrian suspension bridge in North America.

A Bit of History

Closely linked to the colonization and the development of our roads, the history of covered bridges in Québec extends over more than 135 years of services. Although these bridges appear to be quite similar at first glance, they do, however, feature different construction techniques and offer several characteristics that make them stand out from each other. A fact you’ll be able to confirm on your tour of the covered bridges of the Eastern Townships!

In order to protect the wooden bridges against harsh weather conditions and therefore to prevent them from rotting, the decision was made to cover them. Putting a roof on a bridge increased the life span of the structure tenfold, which otherwise would be limited to about 15 years.

Why are Most Covered Bridges Painted Red?

The colour red would have been used to paint these bridges in order for them to stand out from the green summer landscapes and the white winter landscapes. Added to this, the range of colours available at the time was limited and the red pigment and linseed oil mixture used at the time was inexpensive. 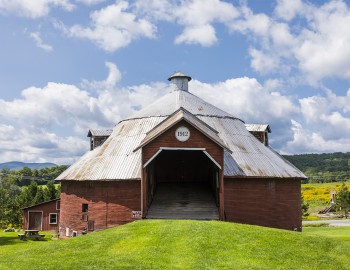 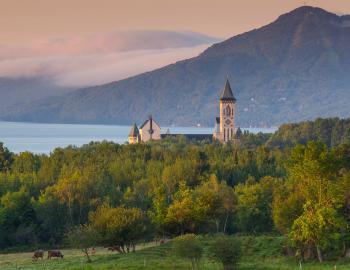 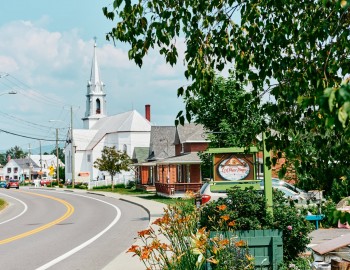