The most delightful surprise I had when I moved to the Eastern Townships is when I went gravel biking on the region’s dirt roads. And I never miss an opportunity to tell people all about it!

The abundance of unpaved roads in Brome-Missisquoi is absolutely fascinating. I explored several of them last summer and there are still quite a few that we haven’t yet discovered. I say “we” because I’ve discovered a real trend is underway here. Many of my friends have become enthusiasts as well.

One of the star circuits of the region is called Le 100 à B-7, the eponym of the annual event named in honour of well-known athlete, Lyne Bessette, today a Federal Member of Parliament. The suggested ride totals 64 km with an ascension of 750 m.

From the Centre national de cyclisme de Bromont, you start by pedalling up Chemin Lotbinière which becomes Allard. At the end of this warm-up, the adventure takes on its full meaning as you arrive on Chemin Doucet and later on Foster, on the east side of Lake Brome. Then, you’ll challenge your calves on Mizener. It’s quite a climb all the way to Chemin De Stukely as you’re awestruck by the route’s dazzling panoramic views of the lake and Mount Brome. Take a moment to savour the decor! A suggestion: When you should be taking a right onto Bailey Rd, instead, continue on Brill. The road is magnificent with all the grand domains established all along your route. You’ll enjoy some very amazing views overlooking the lake as well. On hot summer days, the murmuring wind is truly refreshing. I love it here! Three kilometres further, you’ll reach Spicer Rd which will bring you back on track and the official itinerary.

Next, you’ll head down Spicer and then Saint-Paul as you admire all the beautiful homes that line these country roads. A couple of pedal strokes more and you’re now halfway through the circuit, in the heart of the Town of Lake Brome, previously known as Knowlton. I appreciate the green space at the intersections of the 104 and the 243. In front there’s a bicycle shop and dairy, Cyclerie de Knowlton; As you look around, you’ll see several terraces, a bistro, a catering service, a microbrewery, an Italian fine food grocery store, etc. You’ll then head down these lovely little streets that lead to Douglass Beach. This is the ideal venue for viewing the lake while ogling the sailboats, yachts and paddleboards on the water.

Once you’ve filled up on energy again, get ready to climb a bit more before returning home. Very often, even under a blazing sun, you’ll be riding in the shade thanks to all the trees that span their branches all along the route. Chemins Du Centre and King will leave you speechless with all the farms and luxuriant country residences, perched high up the ridges. You’ll be able to challenge your calves once again as you take on the very steep and narrow Chemin Rogers which will just as abruptly take you to Chapman Rd. From here, you'll take Sanborn Rd, a hill with two plateaus that stretches out over quite a distance before finally heading back down…

You’re now getting closer to your destination. However, you’ll get your final reward only after climbing the “face de singe” (+ 20%) right at the start of Chemin du Lac Gale. Once you’re back on the paved Chemin Gaspé, take a moment to enjoy the mountain setting of the equestrian park, the site of the 1976 Montreal Olympic games. You’ll return by Shefford, Bromont’s Main Street with its heritage buildings, restaurants, cafés and a chocolate factory. Pamper yourself! You’ve earned it.

So, for all these reasons, I’m totally exulted about cycling on dirt roads with my gravel bike and also because there’s very little car traffic here. We feel as if the roads belong to us! They’re narrow, with fewer clearings than on paved routes. Nature wraps itself around us for a true immersion inside the surrounding environment. 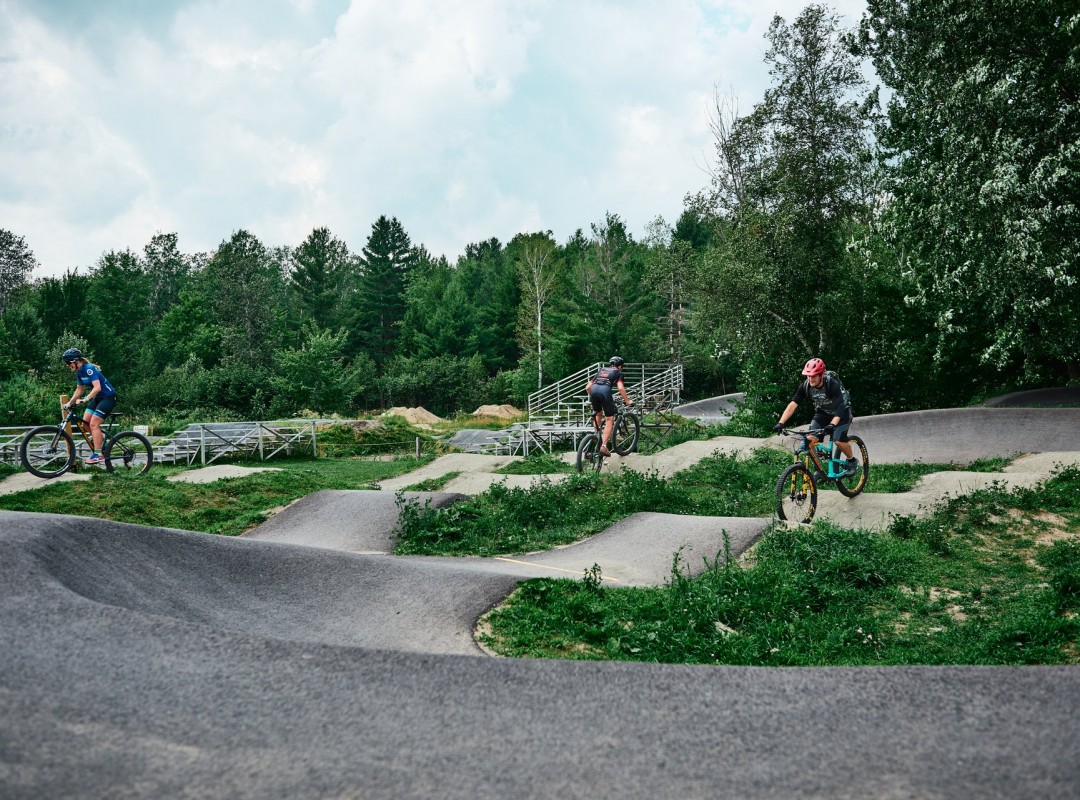 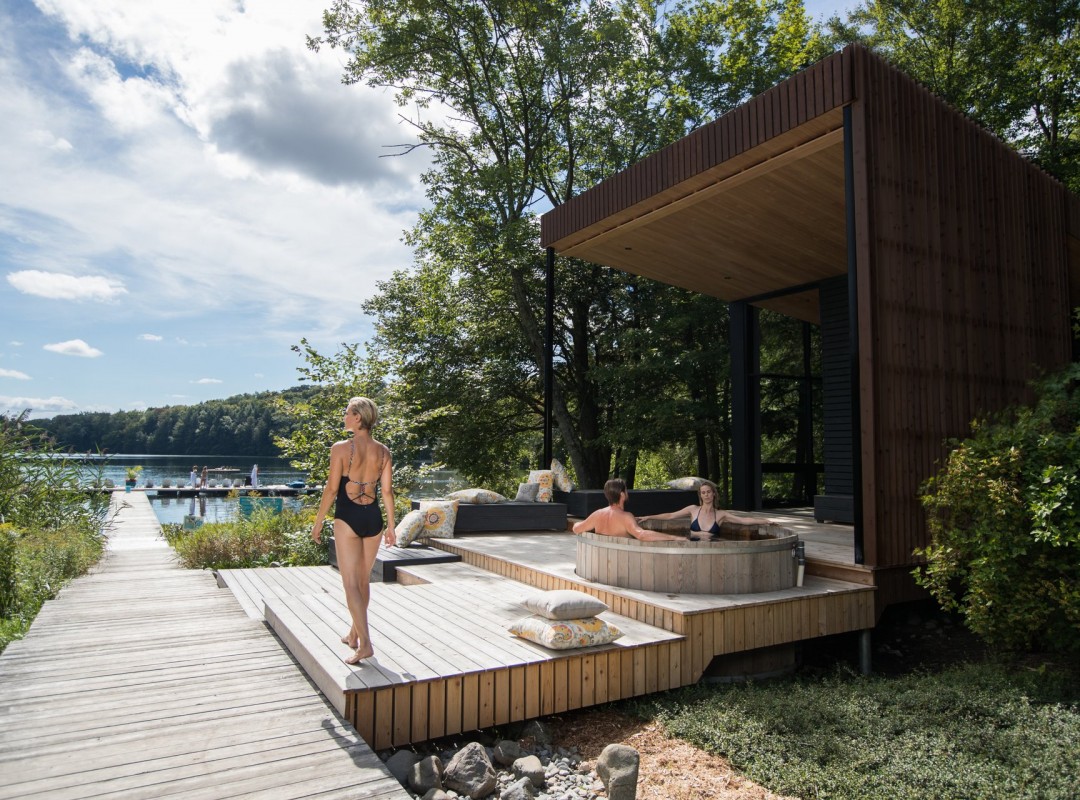 To See and Do as Well

If you still have a little energy left, or if you’re planning to stay in the region awhile, I strongly suggest a BMX initiation on the two pump tracks of the Centre national de cyclisme, as well as a mountain bike outing at Bromont, montagne d’expériences or in the Mount Oak sector of the Parc des sommets.

Plus, if you’d like to visit a very unique bicycle shop, drop by the Pittstop Vélo Café. You’ll find a coffee roaster, a health food café corner serving microbrewery beers, an outdoor terrace and a wood-burning oven where they bake their delicious pizza. 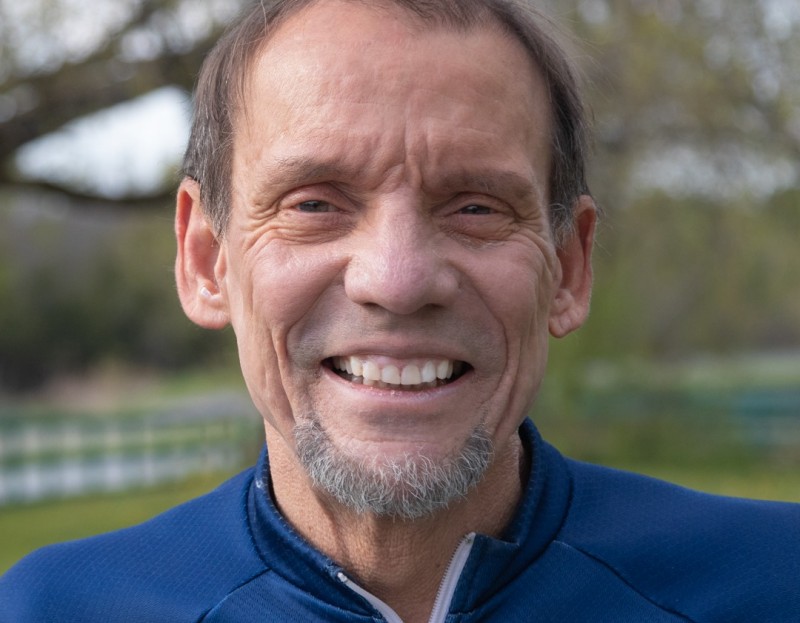 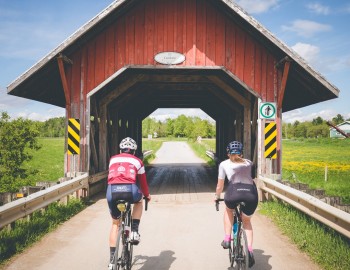 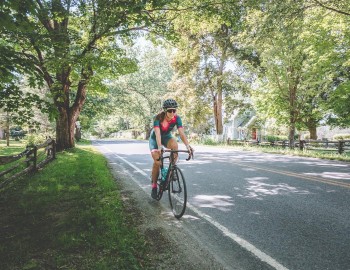 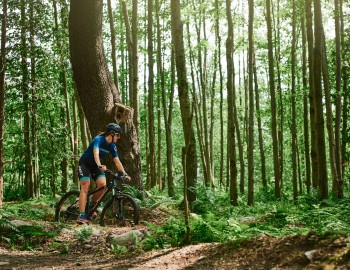